Today we are talking about treatment for diarrhea in dogs. If your dog has diarrhea but doesn’t show any of the warning signs of a serious illness, then it’s generally safe to treat the diarrhea at home, using the following plan.

First, don’t give your dog any food at all for 12 to 24 hours, but give him all the fresh, clean water he’d like.

After that fast, start feeding him a bland diet of 3 parts cooked rice mixed with 1 part boiled chicken. Salt the mixture lightly, but make sure it contains no fat (skin the chicken pieces before you cook them), no spices, and of course, no bones. 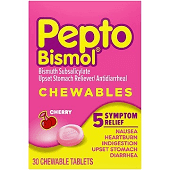 Feed small amounts of this bland diet three or four times a day for three days. If the diarrhea doesn’t improve within one day or isn’t at least 80% better by the end of three days, then you should call your vet. If his diarrhea is at least 80 percent better by the end of three days, start mixing increasing amounts of his regular food into the rice-and-chicken mixture over another three or four days, until he’s eating just his regular food.

Human over-the counter diarrhea medicines such as Imodium (loperamide), Pepto-Bismol (bismuth sub-salicylate), or Kaopectate (same as Pepto-Bismol) can sometimes be used safely in dogs, but don’t try them without talking to your vet to get an appropriate dose and to make sure you’re not overlooking a more serious problem.

Finally, don’t give your dog an over-the-counter dewormer when he has diarrhea. That’s a wasted effort unless you know that your dog has intestinal parasites (based on a current fecal exam) and you know that the dewormer on the shelf is effective against those particular parasites.

2 thoughts on “Treatment For Diarrhea In Dogs”