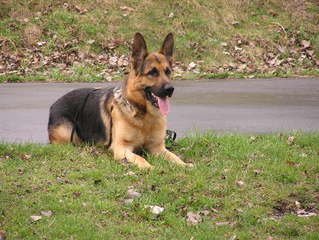 Short Story About A Dog

The Belgian Sheepdog rounded the corner in the road.  It has been a long time since he had seen his family.  He had been left off the side of the road many miles back.  However, he was happier that he was no longer with them, he had been beaten and yelled at so many times he had long to become used to it.

The current problem though, was food.  He was hungry, but he had no idea how to find food; food was the one thing his old family was ok on.  He was fed, even though the food could hardly be called tasty.

He was actually walking in the long grass, just off the road, to be safe.  He had been hit by a car as a pup, and that was a lesson learned about roads.

Before long, he came upon a rabbit, it was shuffling along about 30 feet away, oblivious of the dog’s presence, the wind was blowing in Brad’s face.  Immediately, he began to run after the rabbit, but his charge was premature, the rabbit was up and away before he got within 20 feet of the rabbit.

Brad looked around, taking in the scene, there was tall grass everywhere, it was hard to see much.  In the distance, maybe a mile, he saw a house.  He picked up his pace, trotting along towards the house.  After a few minutes of running, he came upon a house, an old ramshackle affair three stories high, and at least a 100 years old.  Not that Brad knew that, he was a dog.  He just knew that he might find some food and water, especially water.  His mouth was completely dry, it had been about 12 hours since he had been given something to drink. 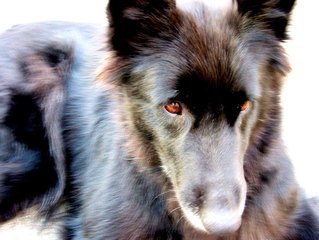 He stepped up on the step, the boards creaking as he went up the stairs.  When he got to the door, he barked, hoping that it would open for him so he could eat and drink.  He could hear foot steps shuffling slowly toward the door, and he licked his chops in anticipation.

The door opened, and an older woman with long, thick, white hair appeared.  She smiled at him and said, “hi Buddy, where do you come from?”  Of course, he didn’t understand a word she said but she sounded nice to him.

“I bet you would like something to eat and drink”, and she hummed as she got out two bowls out, and put water in one, and hamburg that was in the refrigerator in another bowl.  Brad set right to it, drinking all the water and the hamburg was gone in a couple of minutes.

He licked his chops, satisfied and walked up to the old lady, nuzzling her hand.  She gave him a few strokes, and then said “I’ll go find you something soft to rest on.”  With that, she walked off, and Brad looked around.  There was a TV in the corner, at the far end of the room.  It didn’t look as if it has been used much, it was covered with dust.

There was a couch sitting in front of the tv, and a couple of chairs on each side of the room.  There wasn’t much beyond that on the first floor, and he didn’t feel like going upstairs. 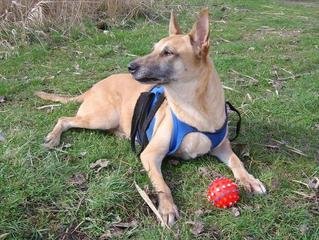 The old lady came back with an old dog bed, a little worn but comfortable.  She laid it on the floor in front of him and said, “there you go.”  She then backed up, giving Brad a little space.  He looked at it for a couple of moments, and then stepped into it, and laid down.  Within a couple of minutes, he was sound asleep.

He awoke to a cracking sound, the door opening suddenly.  There was a big fat man, just pushing his way through the thin door.

“Who’s there?” The old lady called out.  “Your worst nightmare” the man croaked out, his heavy jowls quivering on a freshly shaved face.

“Sure you do”, the main replied, and started to go upstairs towards the old lady.  Brad could see something in his hand, and knew this man to be a threat to his new friend.  He ran up the stairs and chomped down on the man’s leg, teeth, sinking all the way in.  The man kick out, and sent Brad flying down the stairs.

He blacked out for a few moments, and came to, seeing nothing on the stairs.  She heard the old woman scream in fear then, and he shook off the pain and raced up the stairs, searching out the mean man.  He ran down the hallway, racing towards the screaming, which was starting to get choked off. 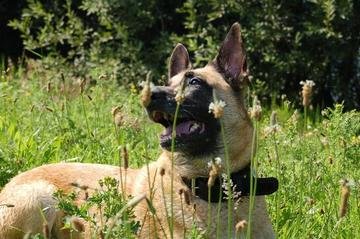 Brad arrived at the doorway of the room.  The was the main, astride the old woman’s mid section, hands around her neck.  Her scream was muffled by now, and had changed over to grunts and gasps.  Brad leaped across the room, latching on the fat man’s left hand.  The man screamed, his left arm in Brad’s mouth.  He picked up a club that he had placed on the bed and swung towards Brad, but this time he missed, and Brad bore down harder, chewing into bone.

The man swung again, this time hitting his ribs, a couple of them Brad could hear cracking.  He charged the man again, this time on his chest, and knocked the man to the floor.  The club had flown out of his hand, but the man was big, and he kept is uninjured hand wrapped around Brad’s throat, while in turn, his teeth reach for the man’s throat.  there was a violent struggle the two going back and forth, but then the man stretched out, reached toward the club.

That was a mistake, Brad got by the man’s injured hand, and sank his teeth into his neck, just as the man struck him in the head with the club.  The world turned black.

The Light Comes Back

A few minutes later, Brad came to.  The old lady was shuffling towards him, red marks on his neck where the man’s hands had been.  “I fixed him good”, she said.  The fat man was in the corner of the room motionless with non fatal bite marks on his neck.  The knife sticking out of his neck, however, was.

“I better call the police, and an ambulance for you”, she croaked, “I’ll worry about myself later, your in worse shape than me.”  She picked up the phone, spoke on it for a couple of minutes, then put it down.  She then walked over towards Brad, sitting down next him.  She stroked his fur again and whispered, “you saved my life, I’m going to keep you with me, how would you like that?”  Brad didn’t understand what she said, but he realized that he had found a kind place for himself for the rest of his life. 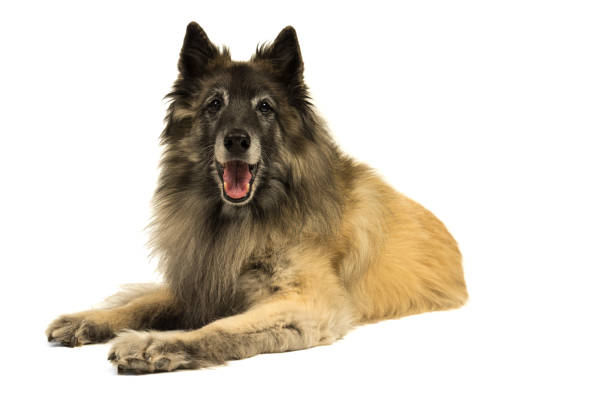 4 thoughts on “Short Story About A Dog”