This is a review of the Chuck It Paraflight dog toy. They are a relatively small frisbee that you use to play fetch with your dog. It has a hard rubber on the outside, and a thin cloth material on the inside. I have one at my home, and I have found them to be very durable. Our Shetland Sheepdog has used it for years, and it is still going strong. This toy flies up to 25 feet when you throw it, but it does tend to veer wide left in the last few feet of trajectory. 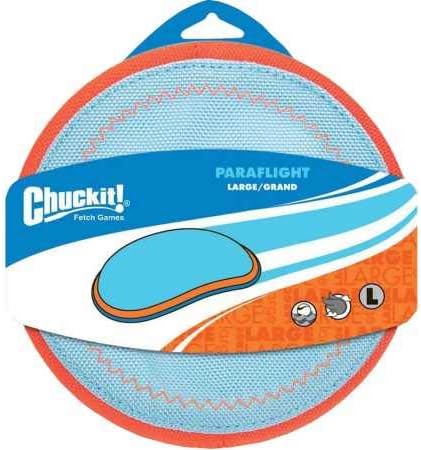 I went to the Amazon Chuck It Paraflight review site and found 1,156 positive reviews. It has been found to have a good throwing distance, and has a good range as far as distance it flew. Even the fabric on the inside holds out well for extended periods of time. It has been found that dogs tend to love this toy by chasing it, shaking it and running around with it.

This toy will last if you take care of it, most importantly keeping it dry. It is machine washable and dryable, however. It also lasts in all kinds of weather and conditions, as long as you don’t let it stay wet for long periods of time when not in use.

It lasts longer than the standard frisbee, one to three months, many say, which they find to be a good amount of time. Others say it lasts 9 months or more. I don’t know if I would consider a month to three to be not so good, but it’s all in your expectations. Like I said I have found that it is lasted for years for me, and our Sheltie is pretty rough on it.

The soft outer rubber layer on the outside is good a dog’s month to chew on. It is light and very dynamic. It remains intact if it is not tugged on too much. Also, other reviews agreed with my assessment that their dogs love this toy to chase, shake, and run with.

Owners find that they jump catch to go after this high-flying toys, and two dogs can tug on it without it quickly falling apart. They are also liked better than tennis balls, which is good because tennis balls can be a choking hazard, and tends to wear down a dog’s teeth.

They are durable to chewing, but not indestructible, but for what it’s made out of, it is a very good toy.

Others are not so happy with it. There are 381 critical reviews for the Chuck It Paraflight. Some reviews state that the blue paint comes off in the water and the paint gets all over the place, including the dog. Others found that the 1-3 life span to be a con, and that it should be able to last longer. Others have stated that they come apart in less than a week, and in some cases, as a little as a few minutes.

It is flimsy and doesn’t travel very far. Others looked down on it because of the fact that it takes a hard left turn at the end of its flight. Others mention that gets torn to pieces quickly if two dogs play tug of war with it. Others have pointed out that the Chuckit Paraflight is not as durable a product as the ones years ago.  Some say that they wear down their dog’s teeth. The stitching at the edges is not well done, and therefore, the outer rim comes off the fabric inside very quickly. 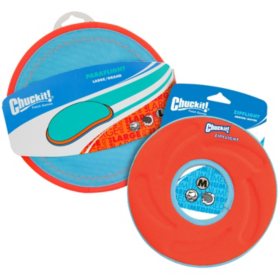 There are those that say fly far, and others say that they don’t. It seems to vary on a case by case basis. There seems to be consensus that the frisbee goes to a sharp turn to the left, which can for some owners and their dogs, to be frustrating.

I would personally recommend this toy, at least for smaller dogs, because I find that our dog loves to play with it, chases it, shakes it, runs with it. Mine has lasted for years under tough usage. Every part of the toy has stayed intact, with the exception of a couple of small holes in the center of it. There are some negative reviews, but as you can see above, the positives outnumber them by a three to one margin.

Overall review is positive, but keep in mind that your experience may differ. I think your experience will vary according to variations in the quality of the toy, and your individual dog. It seems that if you have a larger dog, the quality of the product will seem lower than those that have small dogs. This is an overall good product, just don’t give it to your St. Bernard.