Are wolf dog hybrids dangerous? We never seem to get the balance right when it comes to wolves. First we hated them, almost to extinction. Now we love them, and their close relatives, wolf hybrids, with a devotion that is for many wolf dogs as lethal as the hatred it replaced.

The result of a breeding between a wolf and a dog, most commonly a husky, malamute, or German shepard, the wolf-hybrid is a beautiful, intelligent animal and a potentially dangerous companion that few people can handle or adequately care for. They are often destructive and can rarely be house trained. Determined and resourceful escape artists, they can be chillingly efficient predators. 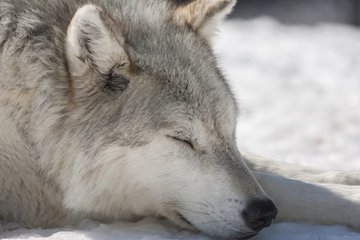 On these points, virtually everyone agrees. On the point of whether they should be allowed a place in human society at all, widespread and often heated disagreement exists.

The intelligence that fanciers adore, combined with size and strength, causes problems at maturity, when wolf-hybrids do what comes naturally. Try for a higher place in their social order, challenging the authority of their human “pack mates.”

A high rate of human deaths and injuries is associated with the animals, as compared to domesticated dogs as a whole, and you hear many anecdotal accounts of vicious attacks, especially on children, by seemingly docile pets.

Because of these problems, some communities have tried to ban the wolf dogs, many humane and animal control shelters will not put them up for adoption, and the few groups that do give permanent sanctuary to unwanted hybrids are always at capacity. As a result, many a wolf-hybrid has paid for the surge in popularity with its life.

All of which means the wolf-hybrid is a pet most people should avoid.

Feel free to leave a comment below, I will respond!